All articles tagged with "Brutal"

Lady Alshari does not like weak people and her new slave was one. She had to do something about it and she did. She taught him how to withstand pain so she forced him to lie down. When he did, she used her boots to trample him. She crushed him balls and forced him to endure and withstand all the pain she inflicted on him. He tried to beg for mercy but to no avail. 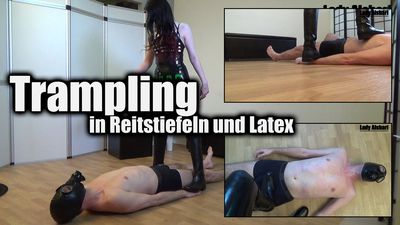 Mistress enforces discipline in her house

This mistress wanted to enforce discipline in her house. She had forgiven her slave for too long and he was starting to take advantage of it. To punish him, she decided to make him endure some pain. She made him undress and she crushed his dick using her high heels. As he cried, she told him she would not tolerate his behavior, and that if he went on with the same behavior, she would give him a worse punishment.

Mistress Diana and mistress Alexandra wanted to punish this slave for what he had done. They were fed up with him and had to make sure he paid for his mistakes. They made him lie down and used their high heels to humiliate and punish him. They made him lick the dirty soles of the high heels before using the heels to trample him and make him cry out in pain.

Miss Katarina is a cruel mistress. She is one of those cruel mistresses who do not look for scapegoats in order to punish a slave. She likes to punish a slave for a genuine mistake but she overdoes it. When her slave messed up today, she used her bare feet to crush him. She crushed his face and even stood on it. She did not spare his neck and almost choked him.

Mistess Blackdiamoond and one of her friends have invited some girls to their penthouse for a wild party night. Before the girls arrive, both of the dominant Mistresses wanna prepare for a great celebration and start dancing on their slave with their high heels. And they do NOT take care of their steps, but treat him like he's the wooden floor. All in all he's the perfect impact-sound reducing material on the terrace floor!

Leaving him distract with pain

Cephora found herself a new slave that is obedient enough to stand her really painful trampling qualities. At least he tries to.. while he's on the kitchen floor, his Mistress stomps on him with her boots that have some really thick heels. As she's naturally dominant, she doesn't feel mercy for him, nor does she take care about which marks she'll leave on his body. But it's quite sure, that he'll suffer more than just one day after the brutal trampling!

They say that hell hath no fury like a woman scorned. This mistress found her husband sleeping with another woman. She was so mad and so furious that after all they had been through he could something like that. She had no mercy for him. She trampled him for days using her high heels and made sure she jumped on him, trampled his face, his balls and anywhere else she wanted including his throat

Woe unto you if you happen to be chosen by these mistresses when they are having a party. They like to get one guy who they use as their punching bag. Today they decided not to punch him but they did something equally bad. They trampled him with their high heels and again with their bare feet. The three of them made sure that the slave was in lots of pain.

Denise has sexy boots and she loves them so much. This slave had hidden them and wanted to go and sell them. When the mistress found out, she was mad and punished him for it. She had found out just before he sold them. She used them to trample him and make him regret what he did. She trampled his head and his chest before doing the same with her bare feet.