Goddess Chanel and her trampling fetish

Goddess Chanel found out that this guy was not doing the things they had agreed had to be done. So she summoned him to her shoe room where she wore different shoes and she used them to trample him. She made him scream as she jumped on him and she got him to learn that she would not tolerate his nonsense at all. She made him regret what he had done.

Princess Serena had asked her slave to do some work for her but she was disappointed when he did not do it. She came back with her dirty boots after she had done the work he was supposed to have done. She trampled him with the same boots and she made him lick them. The mistress also rode him like a pony to teach him a cruel and painful lesson.

Mistresses trample bully as punishment for his bullying

These mistresses knew this guy as a bully and they chose today to end his reign of terror. They invited him to their house where they also bullied him and they trampled him as cruelly as they could. The mistresses enjoyed crushing him and by the time they were done with him, he was in a lot of pain and he promised not to bully anyone again from then onwards. 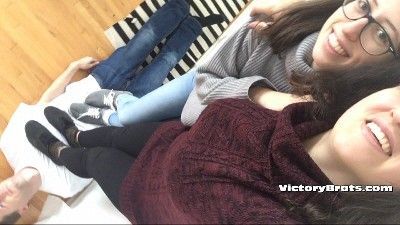 Lady Bunt loves to punish in the woods and today was no exception. She took her slave there and she had fun using her high heels to do it. She trampled his back because she had crushed other parts of his body before and she did not want to do it again yet she had never crushed his back. He cried at the pain he felt but it did not slow down.

Madame Marissa tramples slave for being full of nonsense

Madame Marissa felt that she was not fed up with the nonsense she had seen from her slave. She was not about to tolerate any more of it so she chose to dominate and torture the slave to put an end to it. She did so using her flat shoes. She jumped on him and she trampled him painfully while she told him what he had done and what needed to change.

Mistress Bea, mistress Misty and mistress Beth were pissed to learn that this guy was not as obedient as he had claimed to be when they recruited him as their slave. They did not want to recruit again so they chose to make him obedient. This was done by trampling him using their bare feet. It was all very painful and very cruel as they did it at the same time.

Mistress Claire felt that she had to do certain things that her boyfriend did not let her do. The mistress had to fight for herself and she did so today. She forced the guy to lie down and she used her trampling to torture him. She cruelly jumped on him and she enjoyed stomping on him. He was in a lot of pain but could not do anything about it.

Lady Anastasia tramples boyfriend before breaking up with him

Lady Anastasia felt that she had to break up with her boyfriend. The two of them did not have much to fight about so she created a problem where none existed. She accused him of cheating and then went ahead to punish him by trampling him. She forced him to endure her trampling as she crushed his head and did other unspeakable things to him before she broke up with him.

Mistress Mira and her love for trampling

Mistress Mira has a thing for trampling. And she is not afraid to indulge in it. She had told her friend about it and her friend was also interested in it. The two of them had a great time trampling this guy they paid to endure their trampling. He was in pain but the mistresses did not care. He was forced to do what they wanted since he had been compensated.

Goddess Chanel was not in the mood to entertain any nonsense today. So she used this loser to send a message to the others. He was trampled by the mistress and her friend and he cried as the pain got more and more intense. He cried and begged for mercy but it was as if the mistresses did not hear him as they chose to ignore his pleas and his cries.